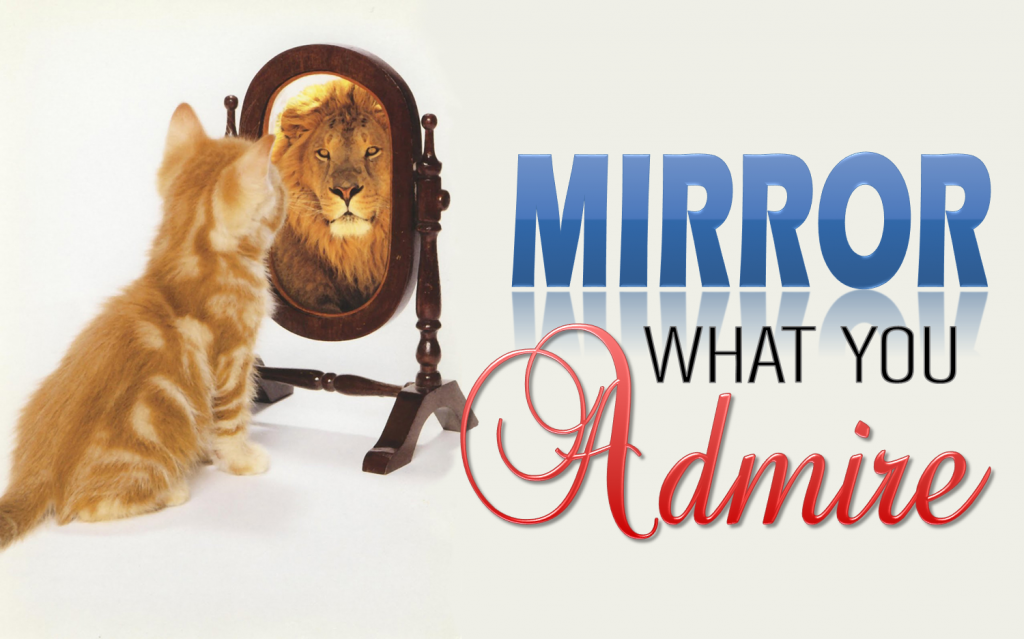 Part 4- Mirror what you admire

Part 4 in this series is the culmination of everything we’ve talked about for the last few days.  We have learned to Attract…Reflect…Become, and now, we must “Mirror what you admire.”

In the last post, we talked about respect.  Oftentimes, respect and admiration are used synonymously.  But, they are not exactly the same.  Just because you respect someone does not mean you want to aspire become like that person.  Most people have respect for others simply because must of us are civil human beings.  Admiration is not as easy to come by as respect.  Typically when you admire someone, you see attributes in that person that you would personally like to develop.  In some cases, you want to become like that person you admire.

In order to BECOME what you admire, you must first follow in the footsteps of that person and “mirror” what they do.  Think of someone you admire.  What is it about them that you admire?  What have they done to get where they are today?  You need to know the process in order to reap the benefits of the outcome.  Here are a few things you can do to  to become someone so admirable, that other people will want to mirror you.

–Wake up early.  You have heard the quote, “Early to bed and early to rise, makes a man healthy and wealthy and wise.”  There is more truth to that than you may realize.  According to Vanderkam, a poll conducted of successful executives revealed that over 90% of them wake up before 6:00 AM.  The CEO of PepsiCo, Indra Nooyi, said she wakes at 4 AM and arrives at her office no later than 7.  Likewise, Bob Iger, CEO of Disney Corporation is up by 4:30 AM.  Arising in the early morning hours gives you quiet time to prepare for the day ahead and to get a few things done before the craziness of your daily responsibilities begin.

–Exercise.  Successful people know that in order for their minds to be sharp and alert, they must take care of their bodies.  Many successful people put exercise as first thing on their list so that it doesn’t get neglected as other responsibilities or conflicts arise.  If you exercise first thing in the morning, you will be refreshed and invigorated for your day, and you won’t have to worry about being too tired later on, when you have been working all day long.  Do it first thing, and make it a habit.  You will be amazed how just this one thing will improve your life.

You may have heard of the old fable of the eagle who fell from its nest and was adopted by a chicken farmer.  Surrounded by chickens, the eagle believed he too was a chicken.  He did not know the amazing potential he had within himself to soar to great heights.  He saw some eagles flying overhead and was intrigued by their majesty, but that potential was unseen because he was surrounded by chickens, and thus believed he was only capable of living the life of a chicken.

Likewise, if we spend our time around people who are negative, or scarcity-minded, we will begin to adopt the same mindset of failure.  Don’t do this to yourself.  The more you are around successful, wealthy people, the more you will begin to emulate what they do.  Successful people have perfected the abundant mentality, and they often desire to show others how they have achieved their success.

–Adopt an abundant mentality. Zig Ziglar says, “You can have everything in life you want if you just help enough other people get what they want.”  You must adopt this mentality in order to have any success in your life.  Be willing to share the knowledge you learn with others so that you can help them be successful too.  The “pay it forward” approach always has a positive outcome.  As you are free with your knowledge and service, people will begin to look to you as a mentor and will want to look deeper at whatever it is you have to offer.

As you are able to grasp the importance of these concepts, you will find it easier and easier to “Attract what you expect, Reflect what you desire, Become what you respect and Mirror what you admire.”

Part 2- Reflect what you desire

Part 3- Become what you respect